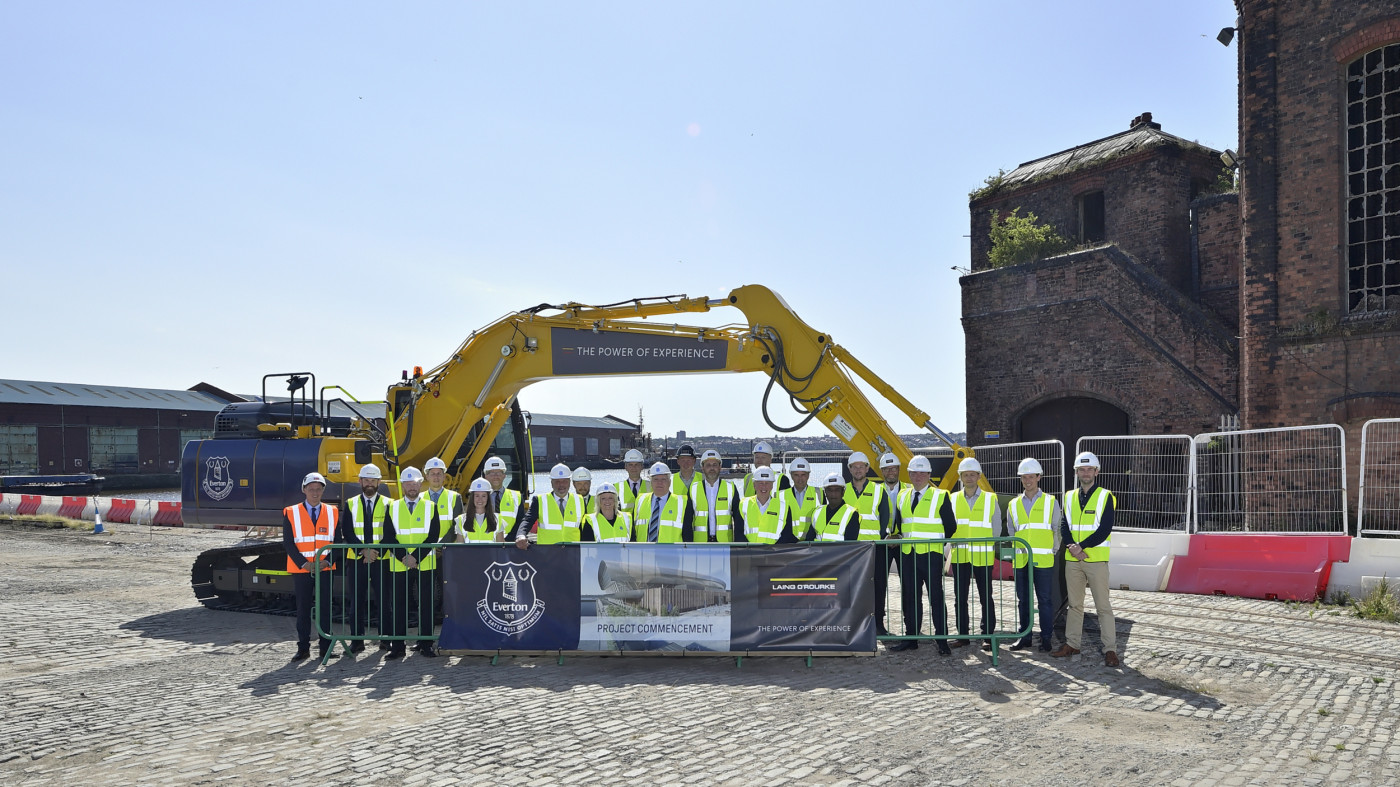 Everton Football Club has held a project commencement ceremony at Bramley-Moore Dock to mark the breaking of ground in the construction of a new £500m stadium.

History was made as an Everton branded excavator made the first incision into the eastern quayside at Bramley-Moore Dock as work to develop the Club’s new 52,888 capacity waterfront home begins to gather pace.

The Club took possession of the site, which forms part of Peel L&P’s £5bn Liverpool Waters scheme in the city’s Northern Docks, on Monday 26 July with construction partners Laing O’Rourke immediately working on putting in place welfare facilities for the near 12,000 construction staff that will be required during the estimated three-year build.

Everton Chairman Bill Kenwright said: “This is a momentous day. One that we have all been waiting for. To know that Evertonians and the people of this great city are together with us on this journey is a special feeling. Now that the work has commenced, we can all watch our magnificent home as it comes to life. I am stating the obvious, but must reiterate that this day could not have happened without Farhad’s continued support on every level and the drive and determination of our CEO Denise, and her team.

“In a few years’ time we will, of course, be bidding the fondest farewell imaginable to our cherished home at Goodison Park. That sad day will be made easier because we know we are going to an astonishing new stadium that will bring our fans and their children - and their children’s children - the kind of joy throughout the next century that we have all shared in Liverpool 4.”

A ceremony to mark the first breaking of ground is traditional in development and forms part of the required enabling works to the eastern quayside, which will eventually become home to the Fan Plaza – an area that could welcome more than 9,000 fans on matchdays. Work is currently continuing to repair and preserve the Grade II listed dock wall, to stabilise the listed hydraulic tower, the raking of the dock floor and preparation for the demolition of existing non-listed structures. Pipework is also being laid ahead of the infilling of the dock in the autumn.

Everton Chief Executive Denise Barrett-Baxendale added: “Breaking ground is a significant milestone for this project, for our football club and our city region. It is a tangible symbol of Everton’s future and a clear signal of our Club’s ambitions.

“Today’s ceremony represents the culmination of an extensive and robust planning process. It delivers an exciting new future for our football club, invests in our local and national economy and supports our community as our region builds back better following the impacts of the global pandemic, while also ensuring the city’s oldest professional football club remains in our spiritual home of North Liverpool.

“I’m delighted we have been able to share today with the internal and external team of planning, construction and engineering partners who have worked tirelessly to make this project happen. I know for them it signifies a real starting point in the development phase of this transformational scheme.”

Everton’s new stadium project is recognised as the largest single-site private sector development in the country contributing an estimated £1.3bn to the UK economy, creating more than 15,000 jobs and attracting 1.4m visitors to the city of Liverpool. The Club’s new home is also estimated to see at least £255m spent through the local supply chain with £32m going into the pockets of local families working on the build. Once complete, the scheme will have acted as a catalyst for more than £650m worth of accelerated regeneration directly benefiting Peel L&P’s Liverpool Waters and the nearby Ten Streets development.

Co-Founder & Operations Director Paul Veness of Endpoint comments: “We’re thrilled to be working alongside lead consultants and architects, BDP Pattern, to integrate wayfinding throughout the new stadium to help ensure an amazing user experience for all. We’re proud to be part of a truly landmark project that will bring communities and football together."

To bring fans closer to the stadium development as construction gets underway the Club will be launching a new website in the coming weeks. The site will offer news and information about progress on the Bramley-Moore Dock site as well as give supporters and stakeholders the chance to view activity on-site through a webcam.